Good and Bad in Poland 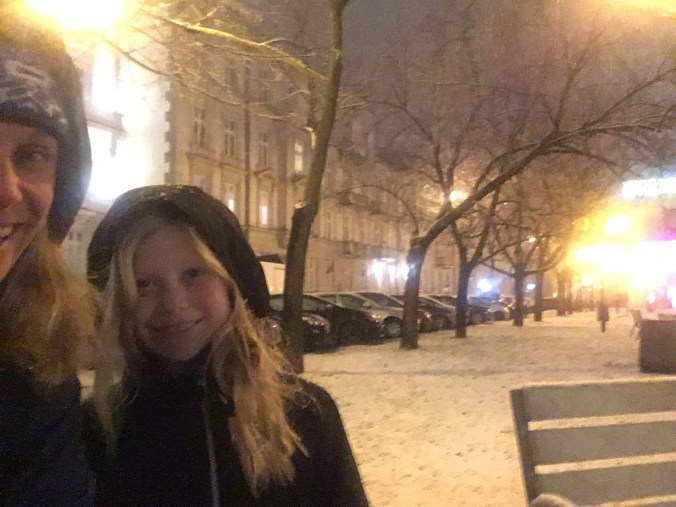 We went to Warsaw, Poland for two days. We visited the biggest concentration camp from World War II. It is called Aushwitz.  That is the bad. I saw snow for the first time. That is the good part.  But there was a lot more good things about our trip to Poland too.  It is just hard to talk about all the good things when the bad was just so bad. 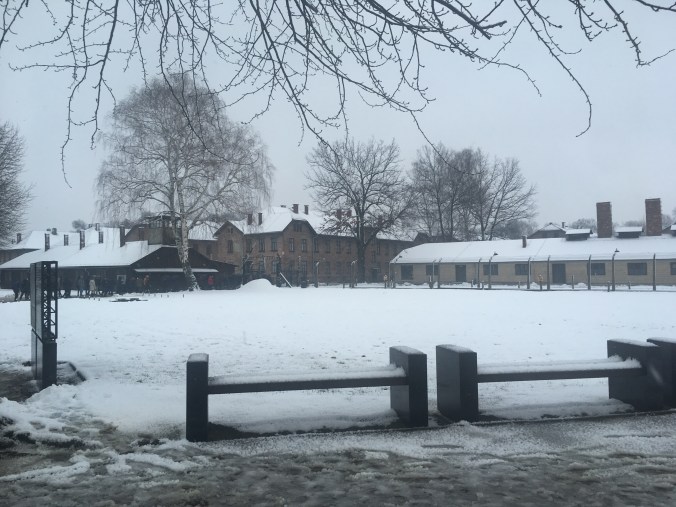 This is a Auschwitz. It is a very bad place in history. It is where the German Nazis killed millions of people. Most of them or Jewish a lot of them or Polish and some of them were Gypsies and lots of other different types of people. We didn’t take any pictures inside because it was too sad. One of the things I remember the most was that they lied to all the people and said it would be great to go to Auchwitz and that it would take them away from the horrible war. Some people even paid to go to Auschwitz. The worst thing I remember is seeing a huge room full of hair. They shaved everyone’s hair when they first got there and sold it to German businesses. There was a big pile of reading glasses too. It’s very hard to talk about Auchwitz because it’s just so sad. They were even rooms where they would put people in to starve them to death. It is very cold there and no one had anything else to wear except for what looked like pajamas. You either went to work all day long or you were killed. They even had experiment where they would see how long it would take for people to die doing different things. They took a newborn baby and they wanted to see how long it would take the baby to die without drinking any milk. One story they told us was about a Polish priest whogave his life in exchange for another prisoner to be saved. He was put into the cell where they starved people to death. After a long time, The priest had not died yet so they ended up giving him poison that killed him. But the man who’s place the Priest took the punishment for one into his 90s.  He was a father and he ended up having grandchildren and had a long happy life. The Priest was made a saint! Saint Maximillian Kolbe. I even saw a picture of the pope praying in the cell where they tried to starve him to death. Auchwitz is so sad that I cannot talk about it anymore. I kind of wish I hadn’t gone but I really understand what happened in World War II much better now beacause I went there. 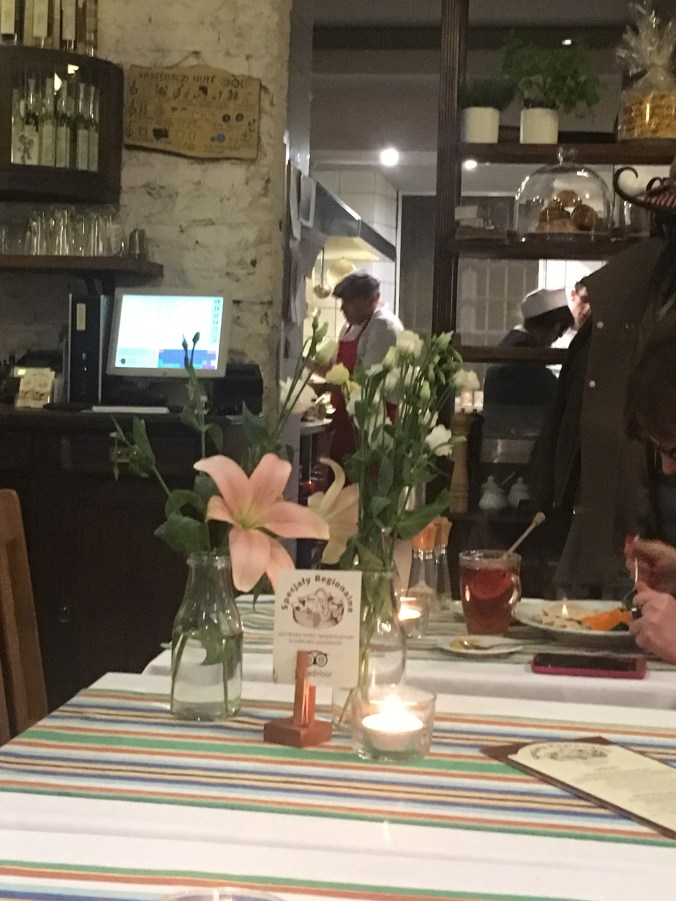 The photo above is my favorite restaurant there. The soup is the best soup ever and I actually found a suit just like hers at this restaurant. I went back to have it twice. 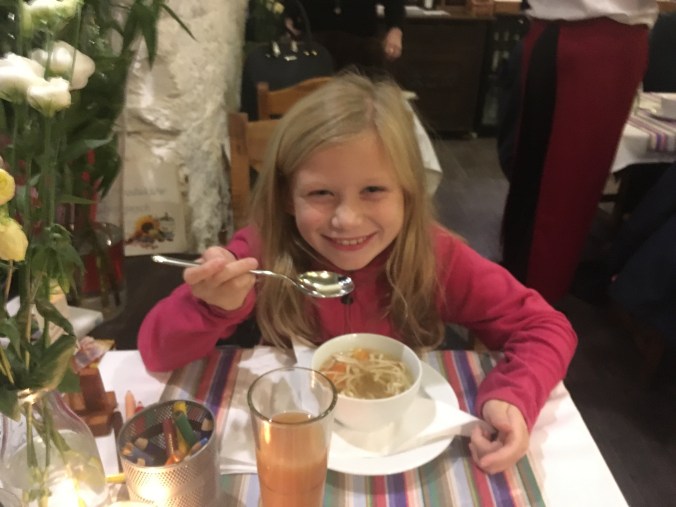 We went to the Copernicus museum. It was three stories of all kind of science experiment that kids can do all by themselves. This is one of the things you can play with. It is called a pendulum. 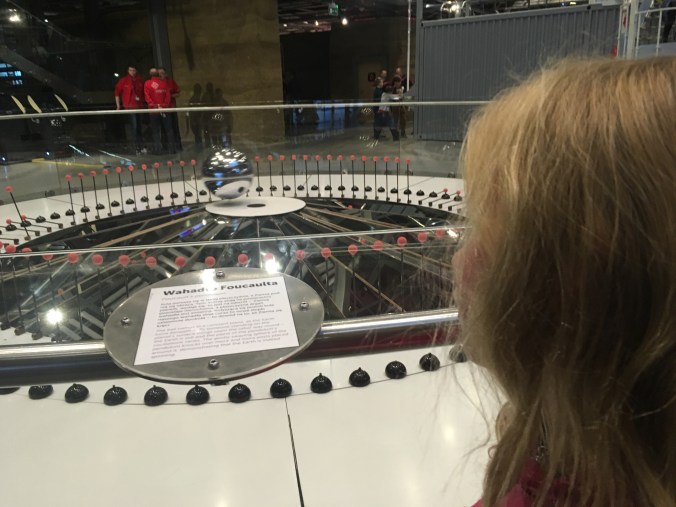 This next photo shows what it looks like to make a weather forecast and weather radar’s. It lets you take sand and if you build the sand up really high it shows it as a mountain on a weather forecast radar. So you can make flat areas that turn different colors and if you separate the sand it shows it as island it’s really cool and when you put your hand over the sand it shows up as rain on the screen. It made us learn how to read a weather radar. It was so cool! This is the first snowman I have ever seen! I’ll tell you story about how we found it. We were walking along, going to the museum and all of a sudden mommy said ‘snowman!’.  I couldn’t see it at first, but then I saw it. It was in this park and it was so pretty with snow everywhere. It was a perfect snowman and even had a carrot for a nose and sticks for arms with branches are hanging on. It could not have been any better. I was so excited. 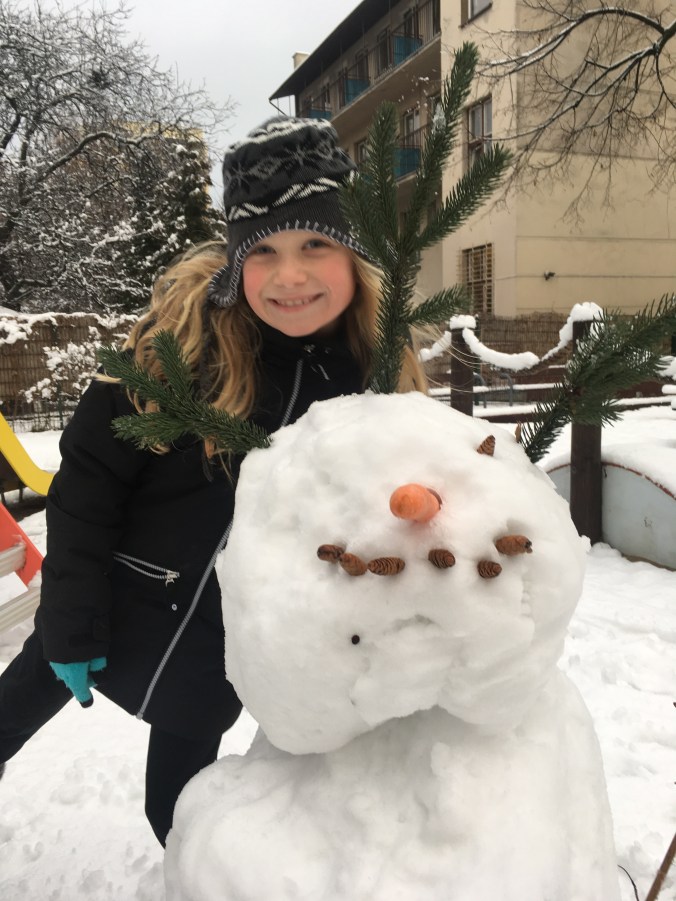 ​What I ﻿learned about Poland with that the people are very strong people. They have gone through a lot and have bought back.

London, England is BIG With My Favorite Thing To Do – Plays!!!