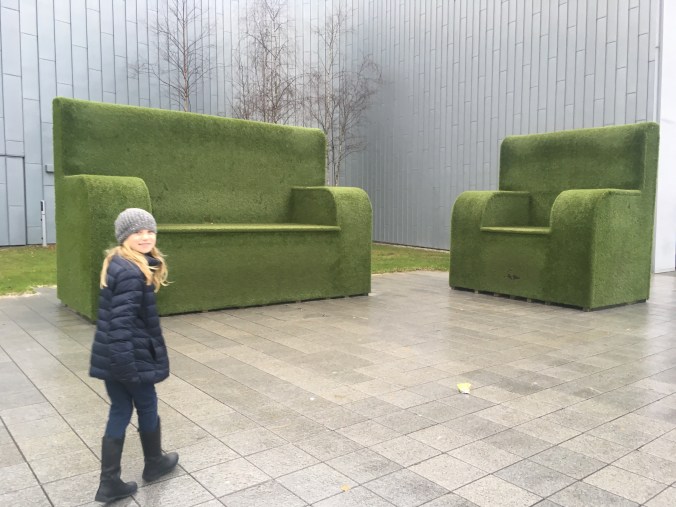 Rod Stewart, The People of Scotland and Fun Times in Glowsgow

Hi, and I am in Glasgow,Scotland right now! Not for long though because we are waiting for our plane back to London.  It is only a one hour flight! 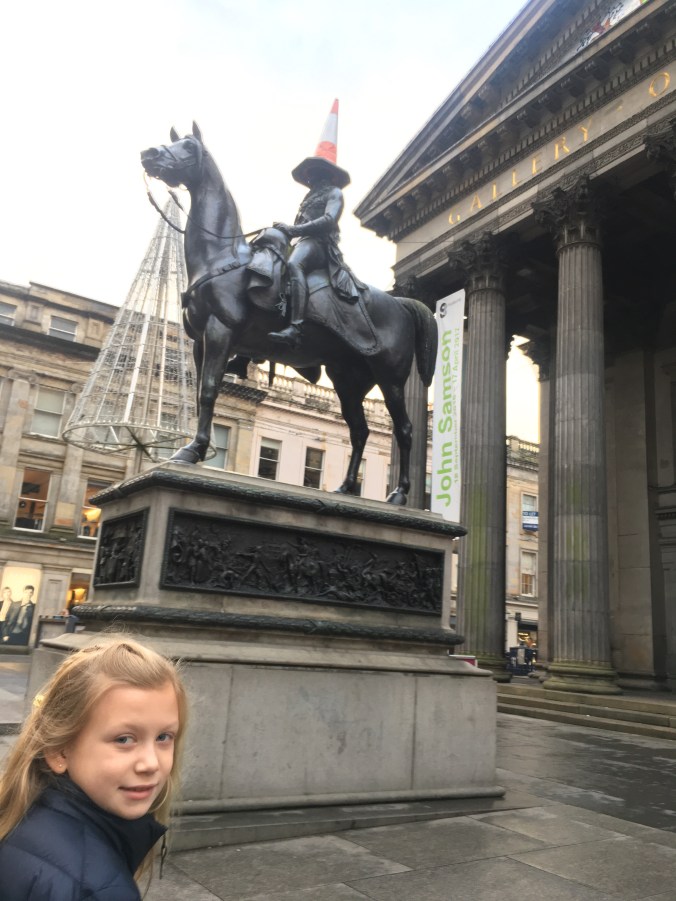 First thing we noticed was that everyone was SO NICE and they all were really funny, joking with us  everywhere we went and just so happy.  Everyone we met loved hearing where we were from.  They all seemed very interested to talk to us and joke around. That was really the best thing. Oh, and the kilts. Even the conceirge in our hotel was were a kilt which was so funny and cool.  Mommy said he had the purse around his waist because there is no place to put his wallet! 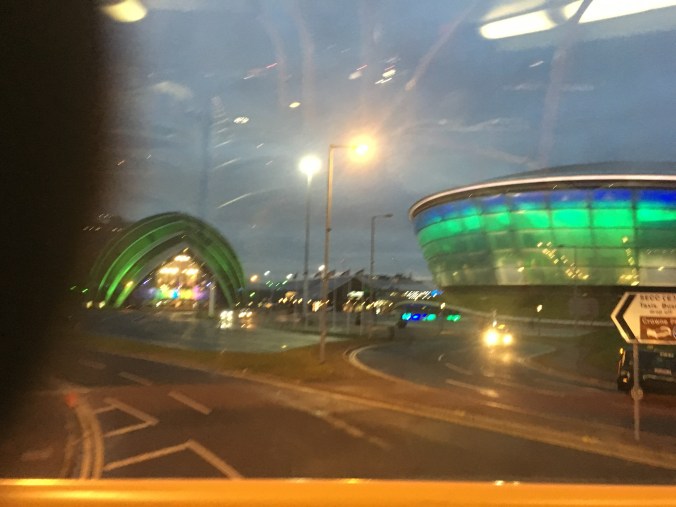 We went to the Rod Stewart concert at the Hydro!!!! 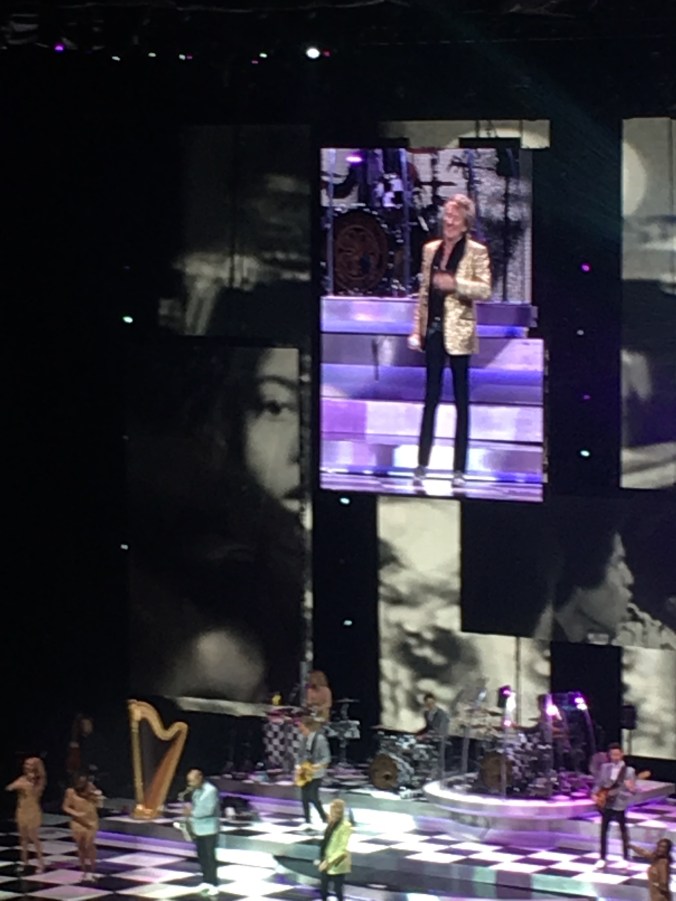 Wave your hands in the air like you don’t care!!! So… I was the only kid there! Crazy right? It was mostly people who were my mom’s  and G’s age! So, that was nice because there was no rushing and pushing, there were seats for everyone, and not much security making a big deal searching people. AND mommy and I had great seats. Sir Rod Steward (he was knighted by the Queen!) played lots of old songs and just a few new ones. Best part was when he played mommy’s favorite song 😍🎼 MAGGIE!!! I loved it because he talked to the audience the entire time.  I love when a performer does that. It was so great too because people were singing with him and he had his daughter sing on stage too!!! I just LOVE that. He also had the most funny stuff in the background. It was crazy how much the crowd cheered when he said in his song”your Celtic” (talking about the famous football team from Goscow). The crowd went crazy another time…. when he sang MAGGIE!!!!  Well, that is it for Rod Stewart! It was my second big concert and I loved it. 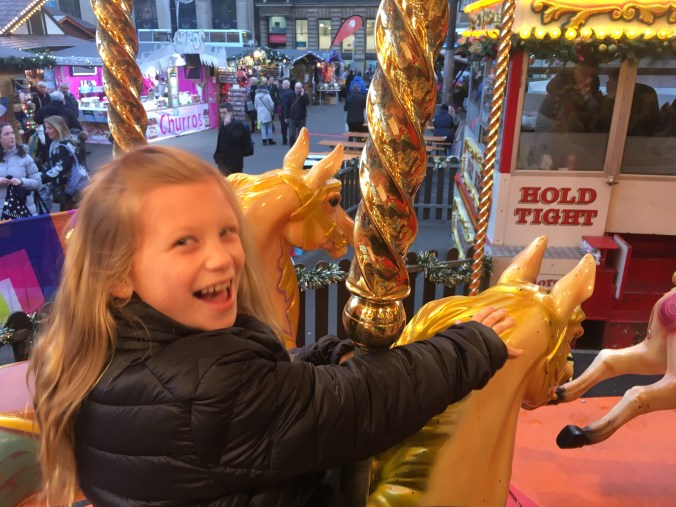 Another thing we did was the FUN FAIR!!! The fun fair was small with only 4 rides and bi🐋g stands. It was a Christmas market in a square in the middle of town. I will name the ri🎡des… the merry go round.  And it was so fast!the fastest ever!  You could be in a snow globe and play in snow while getting your photo taken. We did not go on that ride. The third ride was a huge slide that looked like light house!!! The last ride was a ba👶🏻by ride. A little baby train. The stands were fun too. They had a stand for mommy to get a 🍺 called a beer garden. They had a place to see Santa🎅🏼  and he gave all the good kids👧🏼 a gift and that was fun! There was also food stands, wood work stands, cloth stands and lots more. That is it for fun fair!!! We bought an ornament with our names put on it. The Graff Family! 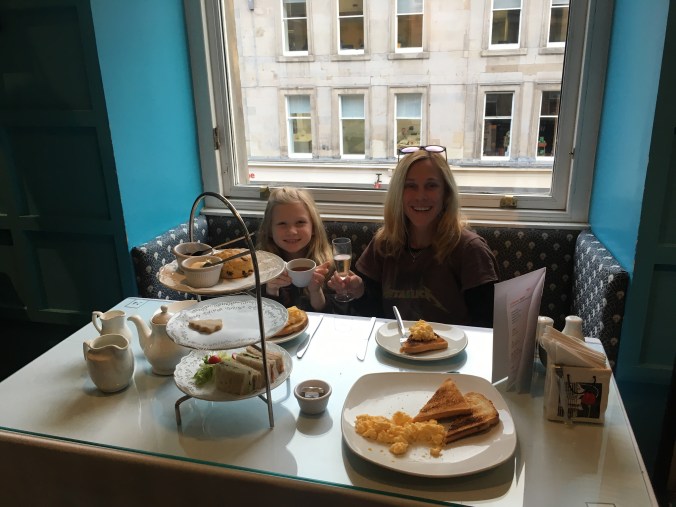 We also went to a tea room called the Willow Tea Room.  Willow was the name of Mommy’s dog so she was very excited to go there.  The inside is designed by a famous designer called Mackintosh. It was really pretty. We had the best cake ever too.  Maringue with ice cream and butterscotch. Yummy! 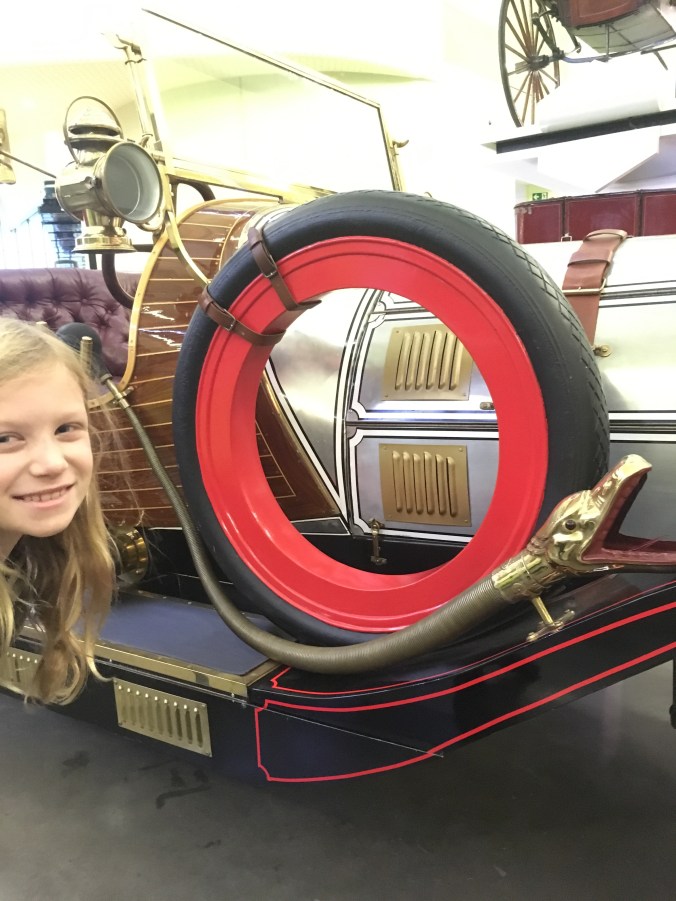 The last thing we did was go to the coolest museum ever!  This is the last part of my blog. 😢- don’t cry little emoji. we will make it the best part of the blog!!🤗 . Welcome my new guest emoji girl!😉 She will be helping me with this last part. Just for fun. 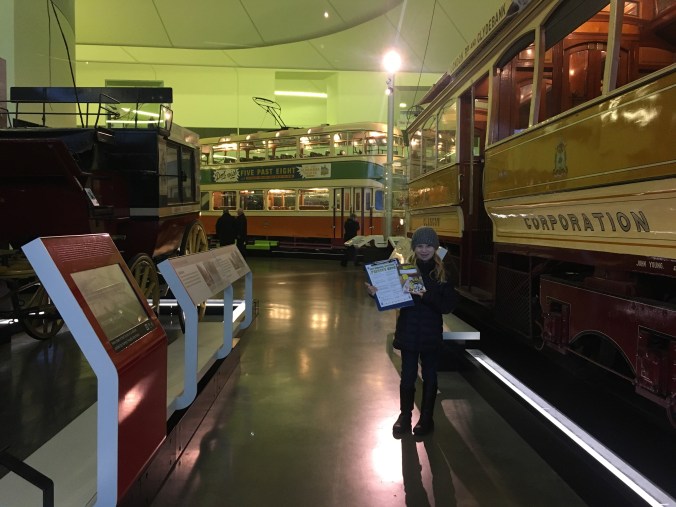 So, let’s hear the last part from emoji girl 🤓:Hi! Cricket went to the River Side Museum!😏 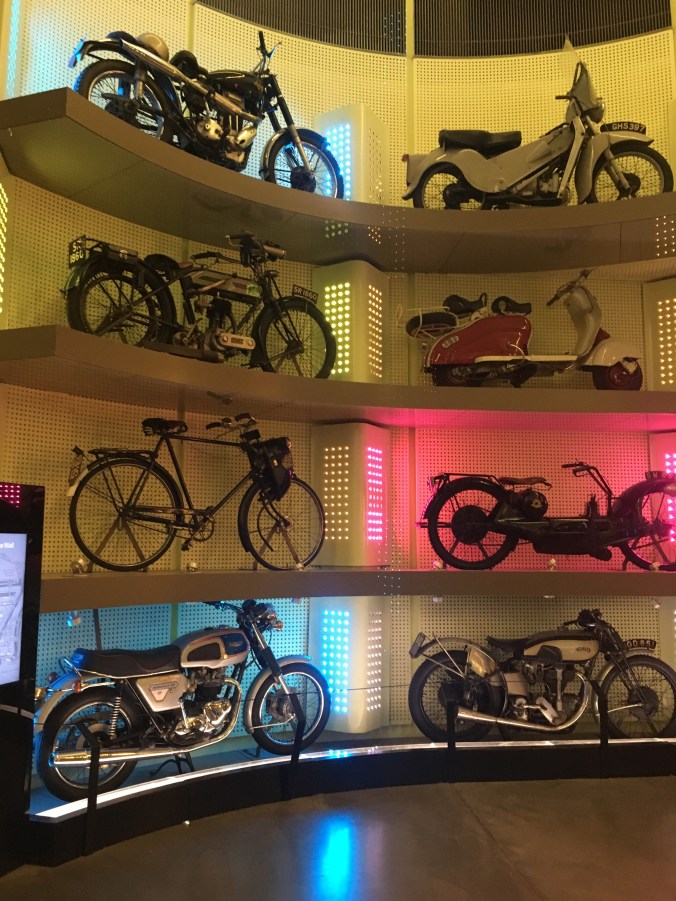 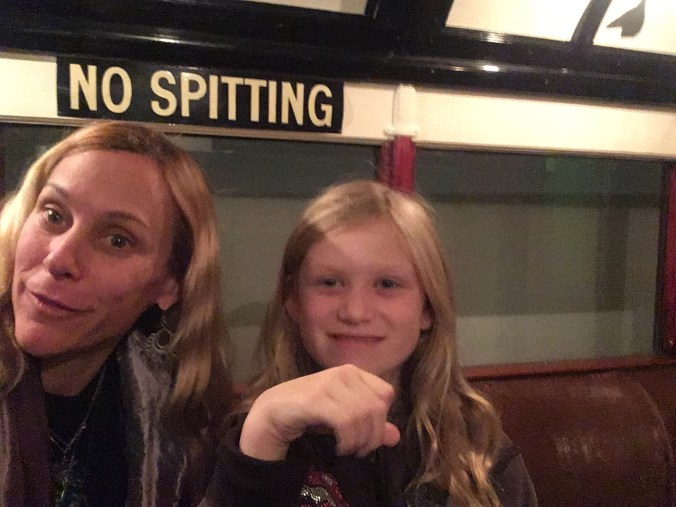 The River Side Museum is a place that shows boats,👏🏼thank you! It had cars and bikes. 😶…what emoji girl?  You want to talk?…. I guess you can talk… 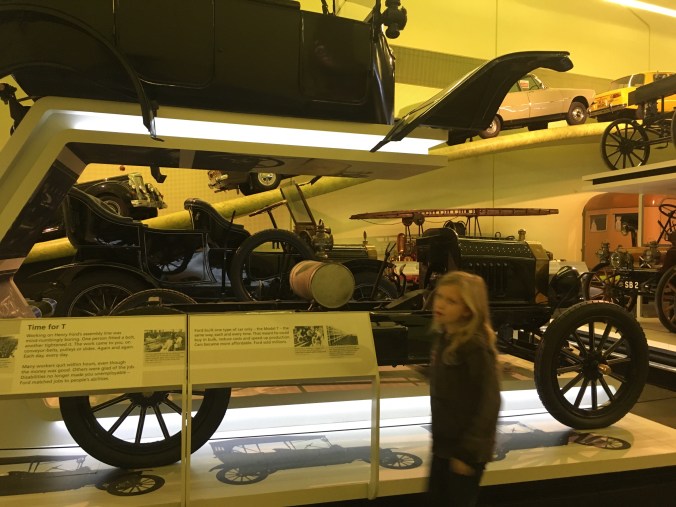 🤓:They had cars, boats, buses, trains, subways, bikes, motorcycles and lots more! They were from a long long time ago……….!!!🎶 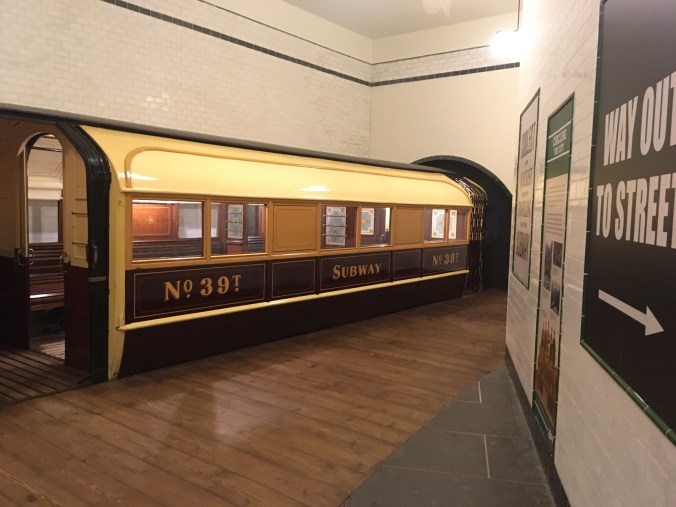 NO, emoji girl, do not start singing!!

😎: They even had a car made from stolen parts of other cars!🤓A man who say the car in a for sale ad, calledthe police. The police took one look at it and could tell it was a huge problem!!!!😌

Sorry.  I am taking over now so I can tell them more about this cool museum.  It was my favorite museum out of all I have seen so far!

There was some cars that would cost a lot of money. They even had a RV from a famous family. The Carter family. They spent 30 years living in it and traveling all around the United Kingdom with their carnival. It would be like living with my emoji family 👨‍👨‍👧‍👦🚕. Not sure I would like that for 30 years. 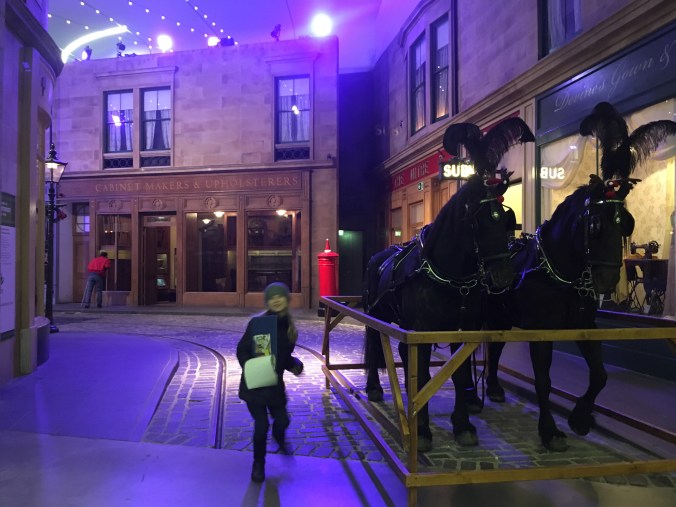 The museum even had a street built inside on it that was a street you would see in the 1860’s-1930’s. that was my favorite part because you could go inside the shops and bus.  They even put a real mailbox on the street. We mailed a postcard to one of Mommy’s friend’s daughter’s class. She is in Kindergarten in Mandeville, Louisiana and they are doing a thing where people send them postcards from all over the work all year long.  They make an album of the cards and learn about everywhere.  We send them a postcard from every country we visit.  We are on country number 9 now. Let’s see: Iceland, France, Greece, Italy, Czech Republic, Austria, Poland, England and Scotland. Yes, 9! Next is South Africa unless we can fit a trip to Ireland in before January 3rd.

Well, sorry to say we are done with today’s blog!!! We saw a lot more in Glasgow, Scotland and it was all really great.  I will hopefully go back one day and see the Loch Ness Monster, Nessie! It is three hours away from Glasgow so we didn’t have time to do that this time. We only had 3 days. We just flew back to London and I am in a cab doing this! We couldn’t take the train home because the train workers are on stike. Hope they get the more money they want!

London, England is BIG With My Favorite Thing To Do – Plays!!!

Cape Town on the Continent of Africa